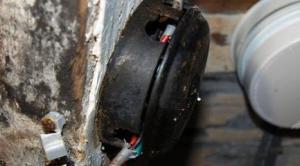 Since 1998, landlords have had to ensure their properties are gas safe – that pipes, flues and appliances are in good working order with annual checks. On more than one occasion I’ve had gas fires condemned and removed during these checks, which is great – no one wants their family subjected to carbon monoxide poisoning (though it’s always unnerving to learn that the fire you’ve been using for the last few months has been expelling harmful poisons).

Yet there is no comparable annual check for electrical safety, despite the fact that there are as many as 7,700 fires and 25 deaths a year due to electrical faults.

So, as a tenant, I’m getting gobby. I’m naming names.

My son and I were renting a property from Manning Stainton on King Street in Morley, Leeds. I first reported a serious damp/condensation issue in  June 2010. Severe condensation in the cellar, so extreme that water could be seen dripping through the light bulb, blew the electrics. I emailed photographs to demonstrate the severity of this. The electrics hadn’t been checked since 2006, and clearly hadn’t been checked before my tenancy started in 2010. Manning Stainton acted on behalf of the landlord in July by replacing the light fitting but not addressing the underlying problem of poor ventilation and electrics.  I was advised that this had been looked at before and a dehumidifier was the only option.  I disagreed – it was obvious  the air bricks were inadequate and I did not feel it was fair that I would have to cover the cost of the electric bill to run a dehumidifier. I had to push for this to be assessed, and visits were eventually made in September/October 2010 but no further action was taken. The only feedback I was given was verbal by one of the contractors, who was clear that the cellar was inadequately ventilated. In the meantime the second light fitting had blown, and again no action was taken to investigate this or the electrics in general to ensure safety regulations were being adhered to.

Despite my repeated emails and calls regarding the problem and my genuine concerns, nothing was done to make the house safe. This all came to a head in June 2012 when damp in the circuitry almost started a fire around 2am one Sunday morning – sparks were flying in the cellar, accompanied by an electrical burning smell. I called the fire brigade, who then called an emergency electrician. It was a very frightening experience, but thankfully the smoke alarms alerted us. We were lucky. I lost various personal items to severe mould because of the poor ventilation in that property, but that’s nothing compared to potentially losing your life.

The problems with the cellar were finally addressed more than two years after I initially reported them, but it took a serious and potentially lethal situation to instigate this course of action. New air bricks were fitted and the cellar electrics replaced. I complained to the landlord/estate agents about negligence and received a reply that simply stated “we refute your claims.” I look back and wish I’d taken it further, but our (almost) three year wait on the council list came through with a perfectly timed offer of a flat, and I just wanted to get us out of that place.

It saddens and angers me that there are still landlords out there who will cut corners to save money, and that registered estate agents continue to represent them. They disregard our belongings, our health and our lives in favour of profits. Don’t let them get away with it. 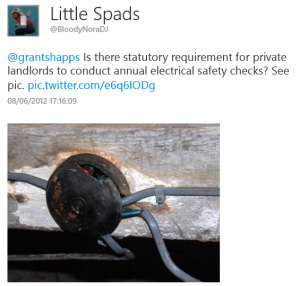 One thought on “Rant about Renting #1 – Call the Fire Brigade!”