I recently ended up debating the cost of social housing with a total stranger on Twitter, who kept insisting councils should charge market rents. I didn’t understand his argument that this would save tax payer money, as market rents surely  put a greater demand on the housing benefit bill? To my mind bedroom tax (spare room subsidy) will do the same – a two bedroom council flat in my area (South Leeds) can be about £40 pcm cheaper than a privately rented one bedroom place. In housing benefit terms it costs the tax payer more to force people into private accommodation, even when it genuinely frees up a bedroom.  I also think a lot of people don’t appreciate just how much time and money it costs tenants to make social housing habitable. In many ways, the time and money we invest in our council homes is comparable to what people spend on homes they’ve bought. No wonder people don’t want to leave – they’ve invested a lot in these homes…

My son and I have been in our council flat for about 18 months. We’d been on the waiting list for around three years (not that long, really) during which time I bid on pretty much every appropriate property I could (and some inappropriate ones too – you never know your luck). There were plenty of weeks where there was nothing to bid on. And I was frustrated that the best estate for us in terms of access to my son’s school didn’t permit children. Odd. Surely two bedroom properties are mostly sought by single parents or couples with one or two children? Couples without children are no longer eligible for two bedroom properties since the bedroom tax was introduced, and there are very few one bedroom properties out there, so I can only assume these flats are rented to non-couples sharing.

We were actually offered a council flat in Batley a few years ago, but I turned it down. What idiot turns down a council flat, you may ask? Well, the enormous expenditure required was beyond my borrowing means. This time around I took the plunge, deciding it was better to borrow the money required as we’d be more secure in the long run (I’ve moved seven times since my son was born, twice because the landlords gave us notice).

Moving into a council property means finding money for the following:

Rent –  you have to pay rent from the moment you accept. They do not appreciate that you may have to give a calendar month’s notice on your current property. Unless you are very lucky with the timing of your offer, you could be paying rent on two properties for several weeks. The office in Batley literally advised me to leave and renege on my last month’s rent (which would’ve cost me my bond) – effectively advising me to break the law. What’s more the flat had a broken window and other repairs that warranted attention – they wanted immediate rent for a property that wasn’t yet habitable. When we moved into our current flat I had to pay rent on two properties for six weeks.

Carpets – councils remove carpets before a new tenant moves in, no matter what their condition. The tenant is responsible for curtains and flooring in their property. Mine cost almost £900 (and yes, I used the cheapest). Many people have to make do with shitty floorboards, but I chose not to. 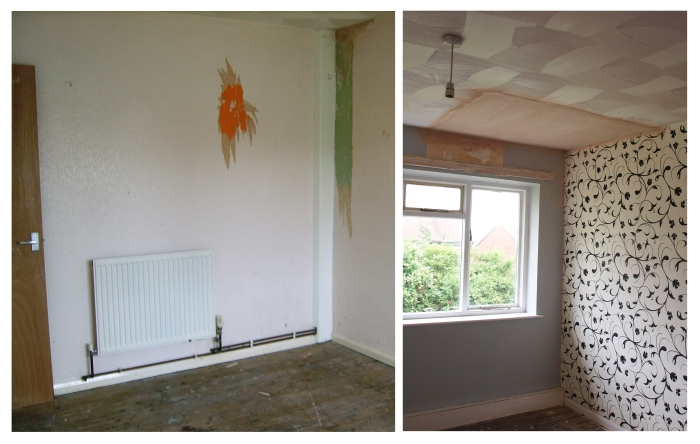 Our bedrooms before we decorated

Decorating – your average privately rented property will generally be in a decent state when it comes décor. Whether you dig floral feature walls or not is academic.  Council properties can be a bit grotty in comparison. Mine needed decorating from top to bottom, not purely for reasons of taste (though this was a factor). Pretty much every ceiling had large patches that had been re-plastered, but not painted. Some walls and ceilings were grubby with general dirt and nicotine stains, the ply-wood doors bare, and we had to fill hundreds of holes left by a bebe gun. If you’re really, really lucky the council will give you a £25 voucher for B&Q to put towards these costs.

Furniture and kitchen essentials – unfurnished, private rented properties generally have carpets and a cooker, sometimes a fridge too. Council properties don’t. The tenant has to get everything themselves – cooker, fridge, washing machine and all furniture. Again, I was lucky. I’ve bought many of these things myself over the years, much of it second-hand, so I only needed a cooker (which a very generous friend bought for us, I just paid for the fitting). But for families who are unemployed and on very little money – well, I’m guessing this is where shysters like Brighthouse profit.

TV aerial – some people will “pah!” at this. “Why should they have a telly?!” Well, I like watching telly, so does my son, and these days TV is considered something we all enjoy and should have access to, unlike my 70s childhood; but, unlike most private rented properties, the TV Aerial and installation is yet another cost that falls on the tenant. The same goes for telephone lines (but to be fair, I’ve had to pay to install that in privately rented places before, too). 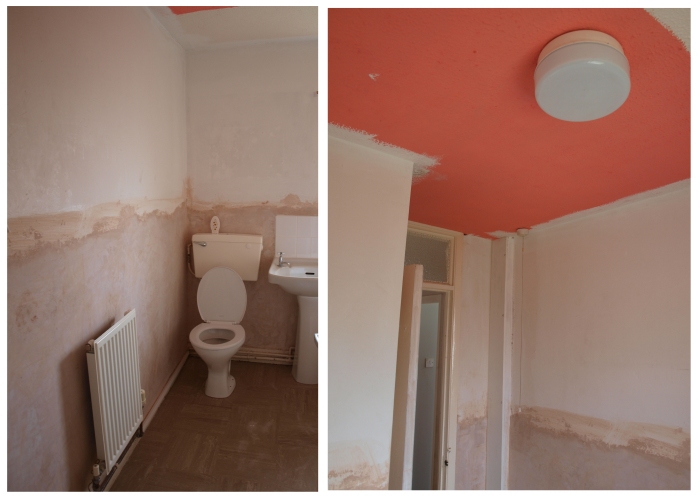 The bathroom. Bright coral patch on the ceiling? A world of no!

Shower – if you want a shower installed, you pay for it. A luxury, yes, but many wouldn’t be without these days.

Garden – council gardens can be dire. Many tenants slowly invest in them to make them nice and what’s more, the council demands that you keep them decent (it doesn’t matter if you inherited a jungle littered with broken kitchen cupboards and a mattress). So you may have to fork out for basic tools and gradually make the garden something more than a place to hang washing. This is still very much a work in progress for me, and not helped by the fact it’s shared with my downstairs neighbour who lets his dog use it as a toilet (lots of poop, but no scoop). 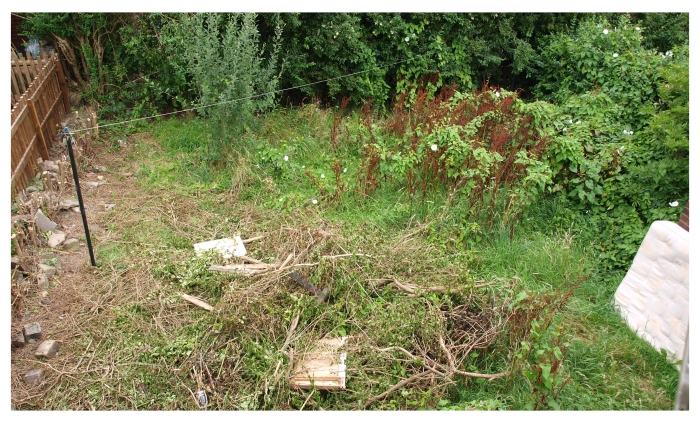 I was lucky as I work part-time and was able to borrow money to make our home fairly  decent, and am slowly paying it back. Other families go without the things we all consider basics – like carpets and cookers. So when people like my  neighbours, both of whom have health problems, are told they have to move from a home they’ve rented for 6 years because they have a spare room, I understand their dismay. They may have spent a lot of time and money over the years making it a home, and have to fund those costs all over again in order to move elsewhere.  On top of that, they have to find a month’s rent and a bond in advance. If there were more affordable one bedrooms properties available, these people wouldn’t now be in this position. Many single people and couples were actively housed in two bedroom properties by their council – councils gave some people “spare rooms” because they had no where else to house them, but now the tenant is being penalised. We need a combination of more social housing and realistic caps on private rents if we want to achieve a reduction in the housing benefit bill. But more importantly we need this because people need homes.